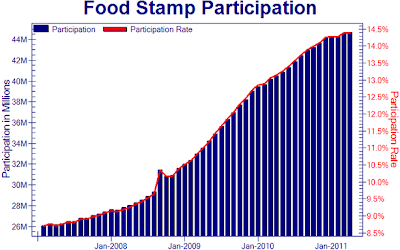 It's such a typical government program -- one that takes a huge amount of money from working taxpayers and then gives it away to other people but without strings, without oversight, and without even a knowledge of how the money is being spent!

Can you say food stamps?

I print below excerpts of Luke Rosiak's important story in The Washington Times about the outrageous government attack on any and all parties who try to to peek behind the curtain of this massive welfare program. Truly infuriating stuff.

Americans spend $80 billion each year financing food stamps for the poor, but the country has no idea where or how the money is spent.

Food stamps can be spent on goods ranging from candy to steak and are accepted at retailers from gas stations that primarily sell potato chips to fried-chicken restaurants. And as the amount spent on food stamps has more than doubled in recent years, the amount of food stamps laundered into cash has increased dramatically, government statistics show.

But the government won’t say which stores are doing the most business in food stamps, and even it doesn’t know what kinds of food those taxpayer dollars buy.

Coinciding with lobbying by convenience stores, the U.S. Department of Agriculture, which administers the program in conjunction with states, contends that disclosing how much each store authorized to accept benefits, known as the Supplemental Nutritional Assistance Program (SNAP), receives in taxpayer funds would amount to revealing trade secrets.

As a result, fraud is hard to track and the efficacy of the massive program is impossible to evaluate…

Maryland denied The Washington Times’ request for data under the Freedom of Information Act, saying the information belonged to the federal government, which instructed states not to release it.

The USDA is notoriously secretive about who receives its money, relying on weak legal reasoning, said Steve Ellis of the watchdog group Taxpayers for Common Sense.

“USDA hides behind a specious proprietary data argument: The public doesn’t want to know internal business decisions or information about specific individuals’ finances,” he said. “The USDA sees retailers, junk food manufacturers and the big ag lobby as their customers, rather than the taxpayer.”

The agency also has no idea what type of food the benefits are buying, even though the combination of universal bar codes and benefit cards makes that entirely feasible…

Last year, the Argus Leader, a South Dakota newspaper, sued the USDA for the information, and the USDA has fought fiercely in court filings that have stretched through this month to prevent disclosure.

This month, the public-interest group Eat Drink Politics called on the USDA to release the totals by retailer and for Congress to require the USDA to determine what types of food are purchased.

In a few cases, states have released subsets of the information, triggering the anger of the USDA...
Posted by DH at 11:07 AM