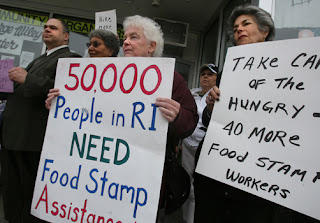 The federal government is not making much headway reducing poverty despite spending hundreds of billions of dollars, according to a study by the libertarian Cato Institute.

Despite an unprecedented increase in federal anti-poverty spending, the national poverty rate has not declined, the study finds...

Federal welfare spending in fiscal year 2011 totaled $668 billion, spread out over 126 programs, while the poverty rate that remains high at 15.1 percent, roughly where it was in 1965, when President Johnson declared a federal War on Poverty.

Throwing money into wasteful, inefficient, even counter-productive welfare programs is not good government.

And, obviously, it isn't good charity either.