The Outrage of the Day 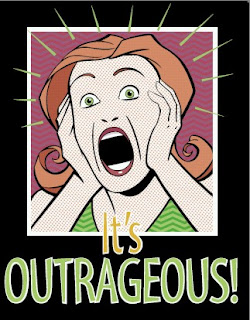 I'm considering making this a new feature of Vital Signs Blog. The problem, however, is that in post-modern America, there's so doggone many of them every day that it would be difficult to select the most grievous.

But at least I'll try and give you some of the possibilities. Here, for instance, are today's 5 entries for Outrage of the Day.

1) Barack Obama finally finds the political courage (well, he was pretty much forced into it by Joe Biden's gaffe) to admit what he has already worked for; namely, a belief in homosexuals being able to enjoy all the legal benefits of marriage. But in his TV interview where he "outs" his evolving position, he informs the American public that the U.S. military is out in harm's way "fighting on his behalf!"

Here's part of Elliot Abrams response from The Weekly Standard -- But Mr. Obama actually did bare his soul unintentionally today (perhaps the Biden disease is catching) with his astonishing characterization of American fighting men and women, whom he referred to as “those soldiers or airmen or marines or sailors who are out there fighting on my behalf.” Really?

Most Americans thought they were fighting for the country, not on Barack Obama’s behalf.  Slip of the tongue, to be sure, but can one think of another president who’d have made it?  They are fighting under his command, under his orders, to be sure, but this particular locution is offensive and solipsistic...

2) Though not very surprising, the mega-abortion conglomerate which is Planned Parenthood seems to be A-Okay with even sex-selection abortions!

3) Not only has Iran continued its violent persecution of Pastor Youcef Nadarkhani despite worldwide attention to their cruelty and injustice. An Iranian court has now condemned Nadarkhani's lawyer to nine years in prison with a prohibition of practicing law or teaching for ten years. Why? For defending Pastor Nadarkhani and others who have been deprived of basic religious and civil rights in Iran.

4) The mainstream media, including the Washington Post, has absolutely refused to investigate Barack Obama's past including the highly mysterious and controversial matters of his childhood, his college records, and the numerous inventions in his biographies. Yet the Post was more than eager to create a story about Mitt Romney's "troubling incidents" against homosexuals while Romney was in prep school. The story is based on a few liberals recalling Romney taking part in a single (not plural) incident in which a kid's hair got clipped. But the definite implication of the Post writer is that the incident was prompted not by the kid's goofy look but by his homosexuality. Are a kid's high school antics fair game for a news story when the kid grows up to run for President of the United States? They may well be. But let's have some tiny semblance of balance, okay?

And Number 5? Take a look at this clip dealing with how illegal immigrants are bilking the IRS and getting tax money from your pockets to give to their families who live in other nations!