Claire, The Lawn & Other Things Which Bite Into Blogging 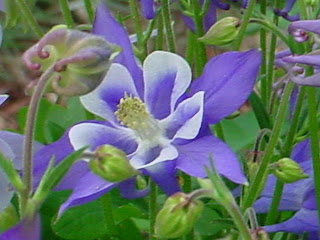 Blogging has been light these last couple of weeks because, in addition to keeping up our other Vital Signs activities (including this month's 12 presentations of "When Swing Was King"), I've had a couple of issues to deal with -- one concerning the health of my lawn and the other dealing with the health...of my wife.

Taking the most important matter first, it turns out that Claire was probably misdiagnosed when she was told (by several doctors) that she was suffering from acid reflux. In fact, after many terribly expensive tests and being given some very strong drugs, Claire's condition wasn't improving. So, Claire pursued her own research and began to push back against the system, insisting on being scheduled for a simple test of her gall bladder (a $150 test, by the way) which revealed -- you guessed it -- she has gall stones which are probably the source of her pain and nausea. She sees her sister's doctor in Lincoln on Monday with surgery probably in her near future.

The second matter that has stolen into my blogging time is a seasonal thing; namely, it's spring and for us that usually means some intensive hours out in the lawn. In other years, this has involved flowers and bushes but our garden areas are now pretty healthy (and abundant) with perennials: columbines, roses, clematis, various ground cover, evergreens, azaleas, burning bushes, lilacs, spiraea, lilium, beard-tongue, Burberry bushes, and our huge Hardy Pampas grasses. Yes, Claire does plant a few vegetables and several kinds of annual flowers into pots -- a half dozen big pots on the deck, another half dozen big pots on the sunny south side, and a barrel out in the backyard. But that doesn't take a whole lot of time.

No, this year, the bulk of our labor has gone into improving our existing borders and the creation of altogether new ones. That has meant trenching around fences, clearing away weeds and unwanted grass, and the utilization of rocks, bricks, and mulch to establish a really lovely look as well as making mowing the lawn easier and more efficient. This has required a gang of trips to Menard's and local nurseries, as well as three trips to fill up the Oldsmobile with "discount rocks" (10 cents a pound) and "antique paving stones" (17 cents a pound) from what's become my new favorite store, The Rock Place out in Elkhorn.

We've been busy -- our aching bodies are proof -- but we still have a bit of work ahead of us. There's some extra applications of seed, fertilizer, and lime to go on the lawn (in addition to our regular summer applications), a few more places where I'm laying stones, and then some pretty heavy work on the public access area behind our back fence. We've planted bushes there in years past and they're coming along terrific. And there's also been a tree planted back there (by the birds, Lord bless 'em) which I've pruned a bit but gratefully left in place. However, there's a section we filled once with daisies which has now grown over with grass and weeds and sneaky traps left by the rabbits to keep me out of there.

But the rabbits, I'm afraid, must give way on this particular front. After all, haven't I already given them swell cover with the evergreen bushes? Anyhow, a few days ago, I waded in with a cutter and mowed down the grass then sprayed on Roundup to keep things dead for awhile. This afternoon, I'll clean it up more, circle the tree with some protection, lay stones for a little travel area for my neighbor's use, and then cover the whole area with mulch and decorative stone.

And so by next week, I think I'll be able to resume a normal blogging schedule -- a prospect that has my almost 61-year old back really pleased.

And Claire's prospects? We know that you rejoice with us that she's feeling much better than she was a few weeks ago and that she's quite upbeat about the possibility of a surer, simpler way out of the mess she was in. We will, of course, keep you updated.
Posted by DH at 1:03 PM