For All of Us, the Catholic Bishops Oppose Obama's Tyranny 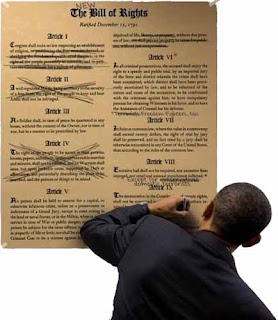 The United States Conference of Catholic Bishops has taken a bold stand for religious freedom. In a recent statement, titled “Our First, Most Cherished Liberty,” the bishops call for repeal of contraception coverage mandated by the Department of Health and Human Services. The clarified position sets up a dramatic confrontation with the Obama administration—and would, if the bishops prevail, help preserve the religious liberty of all Americans.

The HHS mandate requires employers to provide insurance coverage for contraception and sterilization services. It is, according to the bishops, an “unjust law.” They write: “It cannot be obeyed and therefore one does not seek relief from it, but rather its repeal.”

The statement is a rebuke of President Obama and the so-called accommodation his administration proposed in February. It also raises the stakes between the president and the leaders of America’s Catholic Church. The bishops call on Catholics in America, “in solidarity with our fellow citizens,” not to obey the law…

The bishops did not have to take this route, but all those who cherish religious liberty should be glad they did. If the bishops settled for a more expansive accommodation, they might have been able to get an exemption for their hospitals and universities (including my own, Notre Dame). That would have been the easy way to “preserve” religious liberty while also retaining the mandate.

But what, then, would the bishops have said to business owners who likely would not have been covered by a more expansive exemption? How could church leaders say that it’s wrong for church institutions to pay for contraception and abortifacients, but that Catholic business owners must cover these costs?

The exemption approach might have allowed the bishops to secure religious liberty for their institutions, but not for all their followers. That would have been a failure of moral authority and political strength to protect the common good.

To their credit, the bishops appear to understand this and are now willing to lead the battle to preserve religious liberty for all, Catholics and non-Catholics, church institutions and private employers...

(From "Catholic Bishops Take on Obama" by Vincent Phillip Munoz in the Weekly Standard.)
Posted by DH at 9:37 AM