Final Prayers at the Bedside 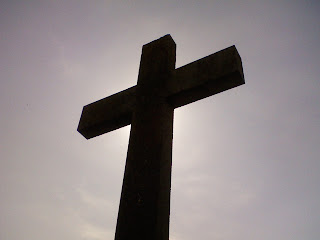 Following yesterday's "When Swing Was King" presentation, one of the nursing home's officers informed me that one of the hospice residents seemed to be very near death. She had been trying to find a minister (preferably a Baptist) to say a prayer with the resident but had been unsuccessful. Then she remembered that I was a preacher. "I hate to put such a burden on you and I know you guys are awfully busy but could you please just take a minute to see her? I know it would mean so much to the family."

I told her I was honored with the request and we we headed down to the hospice room. To all indications, the resident was comatose. But I also know that sometimes, even in such cases as this, there's a lot more awareness than what is imagined. So before I prayed for the person, I introduced myself and spoke to them of the cross, God's love and heaven. And then I prayed aloud for awhile. Then a little bit more conversation and a final prayer.

The family wasn't in the facility right then but I was joined in the room with the nursing home officer and a nurse. It was an emotional experience for all of us. But it was an important moment too -- perhaps in ways we'll not know until we cross the Jordan ourselves.

Later in the evening, after returning from another hospital visit, I received an e-mail from the nursing home officer thanking me again for helping out. She also wanted me to know how pleased the family was, especially since the resident had passed away about 20 minutes after I had left.

"When Swing Was King" is sometimes about a lot more than music.
Posted by DH at 9:18 AM