To Rush Or Not To Rush, That Is the Question 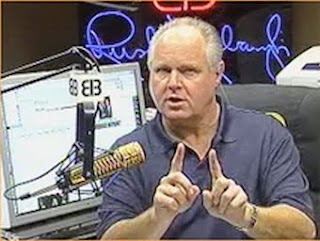 My Facebook link to a Vital Signs Blog post from last Friday  ("Advertisers Need Rush A Lot More Than He Needs Them") elicited a spirited set of comments. Most of the respondents were "ditto heads" of some degree, that vast company of talk radio listeners who regularly listen and applaud Rush Limbaugh.

But there was a good friend and fellow Chestertonian who took exceptions to Limbaugh's style (and content too), pointing out that Rush is a sensationalist who too often uses shrill and taunting rhetoric, pompous posturing and exaggerated arguments.

I appreciate my friend's criticism. But there are other important points to be made about Rush Limbaugh. And here's how I put them in that Facebook conversation.

Certainly, David Limbaugh is the thoughtful, thoroughly Christian member of the family and Rush...well, Rush is the entertainer and provocateur. But, in those roles, Rush has had a tremendous (and positive) effect on the culture.

It cannot be denied that, almost single-handed, he changed the landscape 1) in paving the way for other conservative news and opinion sources, 2) in bringing critical issues up for debate in the public square, and 3) not the least of his contributions, Rush has energized, emboldened and unleashed an awful lot of ground level conservatives who every day take the movement to water coolers all over America.

So, for solid, comprehensive and spiritually sound thinking, we desperately need David Limbaugh and the host of conservative voices that have emerged from Fox News, the internet, think tanks like the Heritage Foundation and so on. But we must admit that the acerbic, brash and purposefully over the top Rush Limbaugh has been of incomparable value in leveling the playing fields in which the culture wars are being fought.

No, I don't listen to Rush Limbaugh (except once in a blue moon) but I do pray regularly for him and I'm most grateful for his powerful impact.
Posted by DH at 10:18 AM