This Is the Time for Chivalry 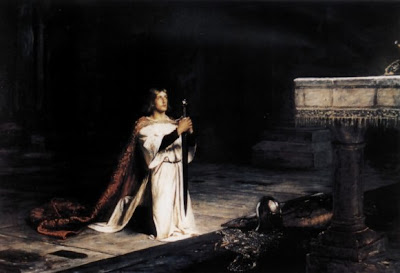 In recent decades, Christian men in the West have generally discarded the virtues of chivalry.

Though the chivalric standards were romantic, stirring, enriching and, most important, founded on the ideals of Christianity, coarser philosophies overtook the affections of modern believers. A love of personal pleasure and comfort, the preference for amusement over activity, acceptance of the lowest common denominators in morality and spiritual vision -- for the majority of American men (even those professing some adherence to Christianity), these things replaced the chivalric ideals that had once been the glory of Christendom.

Galahad, Launcelot, Percival and the other knights of King Arthur's Round Table were no longer remembered, let alone admired. And taking the place of Roland, Charlemagne, Robin Hood and King Richard the Lion Heart as role models for Christian men were hip-hop ranters and the dithering, dopey dads of modern sit-coms.

Is it possible, at this very late date, that we might still we reclaim the heritage of chivalry?  For instance, could we once again inspire our young men to become men of honor -- genuine heroes who live out the highest ideals of morality and service?

Could we challenge them to live pure in heart and body?  To devote themselves to learning manly skills?  To be humbly devoted to their King?  To be an ever-active part of a community which provides inspiration, accountability and assistance for one another?  To be brave and stalwart in the face of all enemies, be they fearsome knights or dragons...or perhaps even more daunting foes like peer pressure, the temptations of the flesh and the press of political correctness?

Perchance, do we dare teach our young men to have a high view of womanhood, one that results in a dedication to uphold their honor and purity?  To be praised as much for one’s courtesy, humility, and self-discipline as for skill in battle?  To be a quick and able defender of the innocent and defenseless? To desire wisdom over gold, virtue over silver, honor over the corner office and the cobalt blue Lexus LFA?  To be willing to lay down one’s life for a friend or for a course determined righteous by one’s King?  To be eager for adventure and be willing to undertake even a lifelong quest if it be in the pursuit of great and noble aims?

My friends and brothers, chivalry is not dead for the Founder of the faith that created it is not dead. He is risen and, through the Holy Spirit, He lives in every single one that has been redeemed by the blood of His cross. We therefore have the grand opportunity to let chivalry flower once again...to provide the compelling beauty (which is the proof our faith) of high ideals truly realized in our lives.

What a blessing this is for us…and for a desperately lost world which so badly needs heroes to point the way back to God.  Shall we start today? We can. We need only put on the armor of our Father King, help our sons (and daughters) do the same and begin our noble quest in His glorious Name.