A Perspective on "Making Kony Famous" 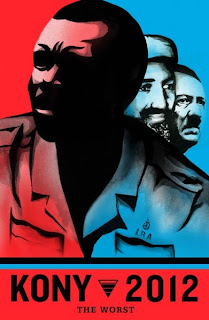 Last Saturday morning, while sidewalk counseling outside the Planned Parenthood abortion mill, Karla, Pat and I had a most interesting conversation about the phenomenal interest that young people around the world had suddenly taken in eradicating the arch-villain, Kony. Among the things we discussed was Kony's ethnic-oriented (and very political) sadism, Satan's dedication to murder, the role of new technologies in advocacy activity, and why there had never been a similar response for the awful butchery that is "legal" abortion.

Well, a few days later, I noted an extremely interesting letter from Michael Cook, the editor over at MercatorNet.com. It is another part of keeping the Kony 2012 campaign in proper perspective.

I am a bit addicted to anniversaries so I rejoiced to discover that 2012 marks the 800th anniversary of the Children's Crusade. Reliable accounts of this incredible adventure are few, but it appears that a couple of charismatic teenagers gathered tens of thousands of children in Germany, France and Italy and led them towards the Holy Land where they would convert the Muslims. The Mediterranean was to part before them, allowing them to march dry-shod to Jerusalem.

By some serendipitous coincidence, I also watched Kony 2012, a 30-minute YouTube video which has been viewed by about 75 million people in a single week. It was produced by an American lobby group, Invisible Children, which tries to protect and rehabilitate Ugandan kids who have been kidnapped, raped and maimed by a mysterious warlord named Joseph Kony. As a marketing gimmick, it's little short of miraculous.

This is a genuine humanitarian disaster. Tens of thousands of children have been enslaved by Kony over the past 20 years, although nowadays his forces, some of them child soldiers, have shrunk to a few hundred. He was one of the first persons indicted by the International Criminal Court.

The video shows American college students chanting demands to stop Kony's senseless war and to arrest him for crimes against humanity. There are shots of brutalised Ugandan children and of local politicians agreeing that he should be caught. But the director's adorable blonde 3-year-old son generates most of the moral outrage.

What's the purpose of this noble-white-guys-save-backward-blacks video? Ostensibly to pressure the US government to provide troops to catch Kony. How? That's the cool part: all you have to do is forward the video and click on Invisible Children's website to buy some merchandise. It's a classic case of self-indulgent slacktivism: feeling good about yourself by feeling sad about others.

Meanwhile, back in the real world, little of the video makes sense. The crocodile tears of American college students are unlikely to drown Joseph Kony. He wanders around in Uganda, Sudan, South Sudan, the Central African Republic and the Democratic Republic of Congo, an area as large as France. In any case, he is largely a spent force, thanks to the Ugandan government. And his victims are but a small fraction of the 5 million who have died in the neighbouring DRC. But the college students may not even know where the DRC is.

The barminess of Kony 2012 is painfully similar to the barminess of Children's Crusade 1212. But there is a difference. Most of the crusaders died en route to Brindisi, on the Adriatic coast, where the survivors were sold to Muslims by enterprising locals. At least there is no danger of that for slacktivists.
Posted by DH at 11:33 AM