Eliminating Starbucks Is Good for Your (Moral) Health 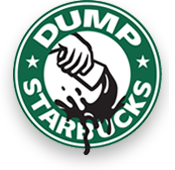 I haven't been inside a Starbucks coffee shop for years. I found that the company's aggressive support of leftist causes left a more bitter taste than anything they served over the counter.

Here, for example is a Vital Signs Blog post from August 2005 in which I wrote, "Guys, there are a lot of Christians drinking Starbucks coffee. And, in doing so, they're paying outrageous prices which give Starbucks plenty of profits to push their social schemes. So...let's pass the word and do our part to help change America's 'brew sipping' habits."

Things have only become worse as numerous reports reveal that the mega-business is doubling down on their advocacy of irreligious things. Therefore, I urge you again to consider buying your mocha lattes somewhere else.

Here's an example of those recent reports. It's from respected columnist Maggie Gallagher whose visit to the Starbucks shareholder meeting produced a clear example of how defiant the Starbucks 'tude is towards traditional morality.

Jonathan Baker, head of the National Organization for Marriage's Corporate Fairness Project was there to ask if the board really approved the statement that gay marriage is "core to the Starbucks brand."

Yes, Schultz said. Most of the room there applauded, but what happens in Seattle doesn't stay in Seattle.

Another shareholder asked how it could possibly be in the shareholders' interest to wade into a hot-button political and cultural issue. A few brave souls in the audience applauded...

But Starbucks has voluntarily decided -- as a corporation -- to associate its brand with a major political issue, the CEO just confirmed. I was in the room. I heard him.

Customers across the world have a right to know that contrary to the promises made by the corporation in the Middle East and elsewhere, Starbucks does subsidize political causes. Drinking a cup of Starbucks coffee, sadly, means supporting gay marriage.

The National Organization for Marriage, which I co-founded, in response this week announced a national and international protest: DumpStarbucks.com. We are asking customers who oppose gay marriage to call both their local Starbucks branch and company headquarters to communicate that they wish to be able to buy a great cup of Seattle coffee without promoting gay marriage, and to switch to another brand of coffee...

I've already signed the petition and will begin next week in following through with other elements of the campaign. But I'll let this blog post be the opening salvo.
Posted by DH at 9:06 AM