British Government: "You Don't Need To Wear a Cross" 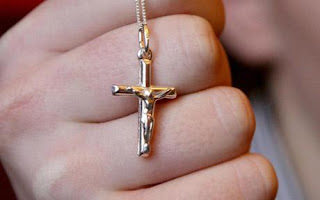 The government of Great Britain is poised to argue at the European Court of Human Rights against two British women who want to wear a cross around their neck while at work.

The Telegraph has the story here including the disclosure that ministers will argue that because it is not a “requirement” of the Christian faith, employers can ban the wearing of the cross and sack workers who insist on doing so.

Lawyers for the two women claim that the Government is setting the bar too high and that “manifesting” religion includes doing things that are not a “requirement of the faith”, and that they are therefore protected by human rights.

They say that Christians are given less protection than members of other religions who have been granted special status for garments or symbols such as the Sikh turban and kara bracelet, or the Muslim hijab…

The Government has also set out its intention to oppose cases brought by two other Christians, including a former registrar who objected to conducting civil partnership ceremonies for homosexual couples…

Lord Carey said: “The reasoning is based on a wholly inappropriate judgment of matters of theology and worship about which they can claim no expertise.

“The irony is that when governments and courts dictate to Christians that the cross is a matter of insignificance, it becomes an even more important symbol and expression of our faith.”
Posted by DH at 10:23 AM