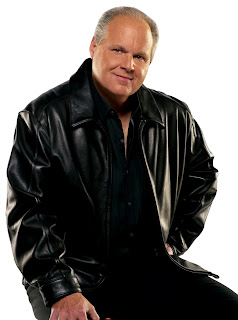 ...Anyway, his budget increases spending, and there are only two areas where there are spending cuts in Obama's budget, which is DOA.  It's a total fantasy.  It isn't going anywhere.  You wonder why he even put this thing out 'cause it's just gonna get slapped down.  Even Democrats are slapping it down today.

But the two areas where the Obama budget has real spending cuts are in defense and just found another cut, that's the postal service.  Obama's budget proposes cutting back mail delivery to five days a week.  You may think, "Big deal, Rush, that's not a big thing. Nobody gets real mail anyway."  Wait a minute.  That's not gonna be a very popular budget cut.  How many Americans rely on government checks?  How many of Obama's constituents rely on government checks?  It's a big number...

According to the new Obama budget, the national debt will be $1 trillion higher in a decade than previously forecast.  Now, he usually gives his budget some kinda name.  His first budget was called "The New Era of Fiscal Responsibility."  I kid you not.  I don't know what he's calling this one, maybe Occupy America.  Maybe this budget is Greece 2...

(From Rush Limbaugh program transcript, "We Have Never Seen an American Politician with the Intentions of Barack Obama," February 13, 2012)