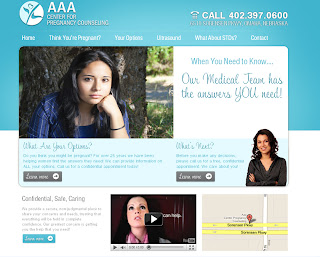 On Tuesday, Claire and I, joined by our guests Ralph and Carol Kramper, had a very pleasant lunch at Dolce Cafe, the new restaurant on West Maple that we have frequented since its opening last summer -- and which has turned out to be a real hit with the general public too. The place is run by an old friend, Gina Sterns, and we're very happy for her success.

After finishing lunch, the four of us had a brief conversation with Gina. She hadn't seen the Krampers for an awful long time and it was neat to see them catching up a bit. Indeed, the sight of them talking together made my mind race back over the years to another time we had all been together; namely, the very first counselor training classes for the AAA Center for Pregnancy Counseling.

Gina, a registered nurse, was part of our first group of CPC counselors along with Claire, Barb Malek, Chris Schlesiger, Winnie Kaipust, Mary Roberts, Bev Weis, Theresa Hall, Pam Nissen and many others who I can't recall right now. And teaching those first training sessions (which were held at a small auditorium at Creighton Prep High School) were Dr. Kramper, Bob Hayes, Grace Sondermeier, Tom Sanderson and the insiders: Chris and Winnie, and me.

Our time at Dolce's prompted a lot of memories of those early times and, throughout the day, we were reminiscing about God's grace to us all in getting the CPC started. But then that night, at a letter-writing party over at the Coppi's, we had a reunion with another couple who were also very involved in the CPC's beginnings, Jim and Marsha Kunz. And that stimulated a whole batch of new memories, especially about the amateur renovations required of the space we rented at 78th and Dodge.

We were so green, so inexperienced and yet so hopeful and dedicated. Vital Signs Ministries (then called the Omaha Christian Action Council) had desperately tried to get others involved in starting a Christ-centered crisis pregnancy center because our hands were full with so many other responsibilities. But after our calls for action, our pastor's luncheons, and our public meetings had failed to bring new leaders into action, we knew we would have to take on the immense task ourselves.

And here it is, more than 25 years later, with the AAA CPC standing as one of the most brilliant Christian ministries in the Heartland.

It was great to go down memory lane a bit. In one day, Claire and I had touched base with 5 other volunteers from the AAA CPC's very first days and, in doing so, we were transported back in time to remember the amazing miracles that our Lord performed among us to lift that ministry into existence.

And we were, of course, also moved to thank God for the miracles that have continued to be the daily fruit of that fabulous life-saving ministry. How it has grown! How it has been protected and blessed! And how it has proven to be such a powerful, enriching and glorious ministry for the Lord Jesus over the years.
Posted by DH at 8:13 AM