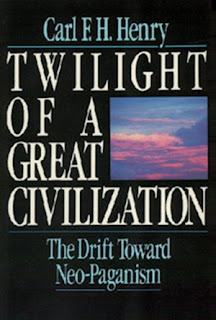 "We may even now live in the half generation before all hell breaks loose, and if its fury is contained we will be remembered, if we are remembered at all, as those who used their hands and hearts and minds and very bodies to plug the dikes against impending doom."

(Carl F. Henry in Twilight of a Great Civilization, 1988)

For the Christian, a forgiven sinner who knows that his inheritance includes everlasting life, spiritual warfare is a critical, yet temporary, part of his existence. This struggle will not last much longer.

Also, it is so important to remember that, using the power of the Holy Spirit, believers can endure even the toughest of trials and defeat even the most sinister of enemies: the princes and powers of the air, the temptations of our flesh and, eventually, even death itself.

But though the image of a valiant warrior who "goes down" fighting is certainly inspiring, it is incomplete. For the Christian who faithfully "goes down" fighting doesn't stay down. He is, in a twinkling of the eye, ascendant -- "going up" to enjoy forever his reunion, his reward and his Redeemer.

Let's allow Dr. Henry's exhortation to inspire us today to do our duty, to live joyfully, triumphantly in the light of our ascendant future.
Posted by DH at 1:34 PM