There's a New Mood of Celebration in the School Choice Movement 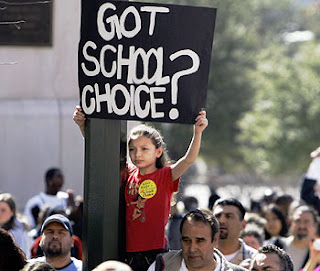 "I strongly support National School Choice Week because all children in America should be able to access the best schools possible. We have a moral and societal obligation to give our children the opportunity to succeed in school, at work, and in life. We cannot meet that obligation unless parents are empowered to select the best schools of their children. I encourage everyone who wants to see a transformation of American education to get involved in National School Choice Week."

The above comments come from comic legend Bill Cosby but there's a whole lot more who are enthusiastically supporting National School Choice Week by attending a giant kickoff event in New Orleans.

There was an air of celebration at the event as participants recognized that 2011 was a banner year for the school choice movement. And the thanks for that goes, not exclusively but primarily, to conservatives. As Mike Brownfield, writing in the Heritage Foundation, points out:

That expansion of school choice came after what appeared to be ominous news for some of America’s schoolchildren in 2009 and 2010. In Washington, D.C., home to some of the country’s most dangerous and under-performing schools, families of low-income children received vouchers through the D.C. Opportunity Scholarship Program, giving them a chance to choose a brighter educational future. That light of hope, though, was about to be extinguished when Senator Dick Durbin (D-IL) inserted a provision in a 2009 spending bill that would have ended the program. That changed, though, when the Tea Party revolution came to Congress, bringing with it a new movement toward school choice...
Posted by DH at 10:49 AM