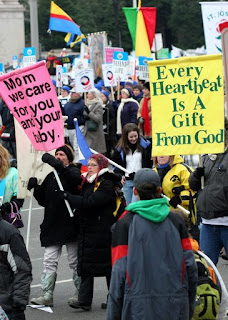 As Jill Stanek says, "This must be seen to be believed." Jill then links to an internet slide show created by CBS' Washington, D.C.station. It's title is “Activists Hold Annual March For Life On Roe v. Wade Anniversary.”

But of the 7 photos in the slide show, all of them center on the infinitesimally small band of pro-abortion demonstrators. That's right. All of the photos star the pro-aborts! There are no pro-life marchers in the whole thing!

But this is a laughable new low indeed.

Therefore, as always, if you want to see an accurate representation of the national March for Life, you've got to go to the activists themselves. So, for a more accurate idea of how the March went this year, check out this nifty video clip from last year's event. It's a time lapse video clip taken by the Franciscans that shows just a portion of the March. It is 90 minutes condensed into one.