Are You Surprised? Meryl Streep Is No Margaret Thatcher. 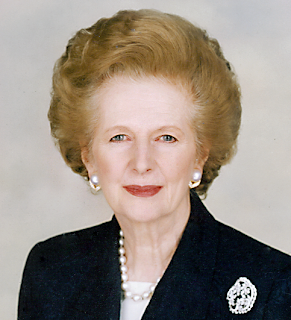 Put quite simply, the new Meryl Streep movie purporting to tell the story of Margaret Thatcher fails miserably to do that.

But merely tilting the script and portrayal in favor of liberal politics and philosophy isn't what is proving disgusting to audiences. After all, The Iron Lady is a Hollywood production -- what else would one expect?

No; as bad as the distortion of history is in the film (and it's pretty bad), it is something else entirely that has deeply offended so many viewers, even liberals who hated Thatcher's policies. The gravest offense is the film's concentration on the anguishing dementia Mrs. Thatcher has been experiencing in her old age.

Some even suggest that it is a calculated cruelty.

Max Pemberton is just one of those who found the film tasteless and mean. Writing in the Telegraph, Pemberton emphasizes that he is far from being a fan of Mrs. Thatcher. Indeed, she represents to him "a pantomime-ish villain of my childhood." Nevertheless, he describes his sense of pain and powerlessness after viewing The Iron Lady.

The film ended and I sat motionless while the credits rolled. Slowly I got up and walked out into the cold January air, sickened by what I’d been party to, so acutely aware that the scenes presented as entertainment and edification – scenes I’d paid to see – were, at that very moment, possibly taking place in a grand house somewhere in central London. I had partaken of cruel, thoughtless voyeurism, the subject of which was powerless to protest at her exploitation...

My anger at the film has nothing to do with politics. I don’t object to the artistic licence exercised over certain events or the way Lady Thatcher’s political life is portrayed. My issue is with the portrayal of how she is now. And I suspect that those who have seen the film will feel the same.

While Meryl Streep’s performance is mesmerising, it is impossible not to be disturbed by her depiction of Lady Thatcher’s decline into dementia. Columnists and commentators such as Charles Moore, Norman Tebbit and Douglas Hurd have opined in this newspaper and elsewhere about this distasteful approach. And David Cameron has similarly questioned the morality of making the film while she is still alive. I did not expect to agree with them. But now I am even more vehement in my condemnation, because, as a doctor, I have direct experience of the reality of dementia for the sufferer and their family...

But to show someone in the throes of an illness while they are actually experiencing it and in terminal decline is chillingly insensitive. Can you imagine an unauthorised film being made about the life of a public figure who was dying of cancer, for example – Christopher Hitchens, say – before his death? Can you imagine watching scenes that his family opposed – showing him writhing in agony, weak and vulnerable? Of course not. There would be a furious outcry. It would rightly be considered a terrible violation of that person’s privacy, and in appalling poor taste...

Watch this film without knowledge of the background and you’d assume Margaret Thatcher had already died. This is what angered me most about The Iron Lady. It is representative of how society largely views elderly people, particularly those with dementia. They are ignored. They are considered to be dead long before they actually are. Those with dementia experience a loss, not just of their memory and cognition, but of respect and dignity.

Sociologists talk of “social death” and “biological death”. Ideally, the two coincide, but in dementia, there is discordance. As people with dementia decline, they are no longer deemed worthy of attention or thought. As far as society is concerned, they are already history. This film gets away with treating Lady Thatcher as though she were already dead, because that’s precisely how society behaves towards the old and infirm. This is lamentable, vile and shameful – and it should anger every one of us.

So save your money. Don't let Hollywood distort your understanding (or even your image) of one of the genuine political heroes of our time. And don't encourage the cruel attitudes towards the elderly and infirm which Pemberton has described above. Make a deliberate decision to stay away from The Iron Lady and encourage your friends to do likewise.

Instead, I suggest that you watch this quick video and then sort through the many terrific offerings for further investigation of Mrs. Thatcher's real life and legacy here at The Margaret Thatcher Foundation.