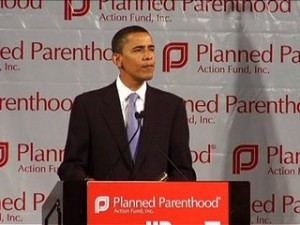 "Laziness. Nothing frustrates me more than when people aren't doing their jobs. The thing actually that I most dislike is cruelty. I can't stand cruel people. And if I see people doing something mean to somebody else, just to make themselves feel important it really gets me mad. But, with myself, since I tend not to be a mean person, you know, if I get lazy, then I get mad at myself."

"When people aren't doing their jobs?" Uh, about those vacations, golf games, basketball sessions, the refusal to meet with Congressmen, the gala parties, the endless fundraising dinners -- and the general incompetence that has marked Barack Obama's years in the White House? He can't abide laziness? For crying out loud, laziness and Barack Obama are old and dear friends.

"The thing actually that I most dislike is cruelty." This from a man who aggressively defends, even promotes abortion? This from the fellow who insists that taxpayers pay for abortion and even denies citizens the rights of conscience to refrain from participating in abortion?

Is he so clueless that he doesn't really know what happens to the babies that are cut up, sucked out, crushed, and poisoned by the abortionists he strives so hard to protect?

Of course he knows; he just hopes his self-aggrandizing lies will keep you from realizing what he really is. For here again, cruelty is an old pal to Barack Obama, going at least as far back as when he voted for infanticide by voting against Illinois' Born Alive Child Protection Act.

Go ahead and read the rest of this cloying interview if you want -- but be prepared. For instance, you might want to have a little bag beside you for when the retching starts..
Posted by DH at 4:01 PM