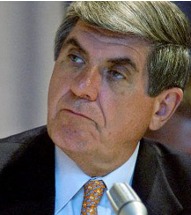 We have asked you for many years to join in the effort to remove tax funding from Planned Parenthood, the nation's largest abortion organization, an extremely profitable business that is now killing nearly 350,000 preborn babies every year through surgical abortion.

And many, many more through deadly chemicals.

Though you’ve long claimed to be pro-life, you have stubbornly refused to cut government funding to Planned Parenthood. What a shameful legacy to leave.

Senator Nelson, even the revelations through undercover videotapes of Planned Parenthood staffers from around the country covering up statutory rape and giving advice to sex traffickers in how to escape the law, haven't been enough to budge you from your enthusiastic support of Planned Parenthood receiving huge amounts of taxpayer money. It's really quite incredible that you continue to think you can pose as a pro-life politician given your unrelenting support for the country's #1 abortion provider.

Yes, I know what you will write me in response -- that same old form letter that uses the “separate pockets” argument that you've tried to sell so many times before. It just doesn't make sense, Senator. Any dollar given to Planned Parenthood from taxpayers frees the abortion organization from using its own dollars (and they rake in millions) any way they desire, including promoting sexual promiscuity among young teenagers and paying the salaries of abortionists.

No, Senator Nelson, Planned Parenthood should be denied even one dime of taxpayer money. And because you've defended for years this outrageous misuse of government funds, Ben Nelson should be denied another term in the U.S. Senate.