A Review: The Napoleons Autumn Getaway 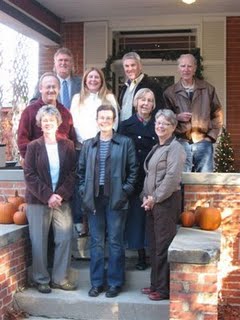 Uh oh. It's been brought to my attention that I forgot to upload a post about the autumn retreat of the Notting Hill Napoleons (our literary society of 20 years standing). And even though it's old news now (our getaway was two weeks ago), I suppose that a description of the event still has value for those of you who asked for it --as well as those of you who are interested in literature, book clubs, Christian fellowship and excuses for getting out of town. So here goes...

This year's autumn getaway was an exceptional success. Claire and I had quite a bit to do on Friday (including an afternoon presentation of "When Swing Was King") and so we didn't make it down to Nebraska City until around 5. Having already arrived were Ruth Denzler and Quint and Carol Coppi. Within an hour or so, the rest of the gang made it: Karla Struble, John and Barb Malek, Chet Thomas and finally, Bill and Karin Coker.

And, of course, welcoming us all with open arms was the superb hostess of the Whispering Pines Bed & Breakfast where we spend these retreats, the gracious Jeanna Stavas. The place was already beautifully decorated for Christmas (except for the battery-operated candles which go in all the windows -- Jeanna saves that job for me) and we settled in. As always, we felt right at home immediately. We enjoyed catching up with Jeanna and learning how God is blessing her business and then we started in getting dinner ready.

You see, the way these weekend getaways work is this -- we rent out the whole house, the extra room in "the barn," and the kitchen. Jeanna provides breakfasts for us on Saturday and Sunday (and oh, what breakfasts!) but otherwise we're on our own. We fix the other meals ourselves and have the run of the place for our conversations, book discussions, games, watching a bit of football, lounging around, napping, whatever. It's terrific. And a more lovely, comfortable bed and breakfast you won't find. So, take this endorsement from the whole group of Notting Hill Napoleons, Whispering Pines (less than an hour away from either Lincoln or Omaha) is a great place for such diversions.

After a delightful dinner of wild rice soup, sausage/zucchini soup, bread, cheese, crackers, veggies, and a couple of luscious desserts, we got down to the most difficult part of the weekend; namely, deciding which books to read for the coming year. This has never been an easy task because, close Christian friends and colleagues in ministry that we are, we are still 11 individuals who tend to have wildly different views on what constitutes worthwhile literature!

What makes it even tougher every year is that we have already gone through so many of the classic titles already. Claire and I would like to remedy that by simply including a generous amount of re-reads but, alas, that's a minority view. And so we have had to scramble in recent years to come up with our reading list.

(How did we do? You can read here the detailed list of recommendations that Claire and I submitted and then over here you'll find the list the group finally decided upon.)

The book selection process went well and quickly as we chose from 4 lists that were submitted. That was followed by a performance at the dinner table of Bill's annual anthem. Bill is, among other things, a published poet and songwriter and every year he composes a very clever, humorous song using the titles of the books read that year and the names of club members. This year was one of his best. After that, we broke up into individual conversations for the rest of Friday night, several heading to bed a bit early in order to get well deserved rest...and to finish reading the Dickens novel due for discussion the following afternoon!

A precious tradition for me every Saturday morning of these autumn retreats is getting up early and enjoying an hour or so of coffee and prayer with Quint before everyone else gets up. We had a very sweet time together and, like usual, the first two who joined us were Karla and Ruth. By the time Jeanna served us a delicious breakfast, everyone was up and eager for the day.

While some finished reading, others took off for walks or to do a bit of thrift shop shopping downtown. I found a couple of used books at one store I frequent every year and a 4-CD Christmas music collection ($9.99) at a new Christian store on the main drag. I got to talking to the fellow who is trying to make a go of this new venture. He was an over-the-road trucker for 20 years previously so it's going to be a stretch for him. And, of course, a retail business, especially in a little town, is a risky proposition. So, if you're looking for a small business to support in the area, consider Revelations in Nebraska city.

Lunch was enjoyed early in the afternoon and then we settled in for our discussion of Charles Dicken's Pickwick Papers. The book and the nearly 3-hour discussion we had over it were both superb. (My thoughts on Pickwick will come in a later Book Den column.) The rest of the night included wonderful conversations, a fabulous dinner with delicious dishes prepared by each club member, a hilarious experience in playing charades and spoons, more conversations and a restful night. (Well, restful unless you had to stay up till the wee hours in finishing your preparations for a Sunday School class and sermon!)

Because several of us had to leave early, Jeanna served breakfast at 7:30. And the stuffed French toast was well worth getting up for! As we drove to church, Claire and I were thanking God for another delightful getaway with Jeanna, Dickens and our Notting Hill Napoleon friends. We shouldn't have to do this only once a year!
Posted by DH at 1:07 PM