Keep Praying for the Persecuted Church 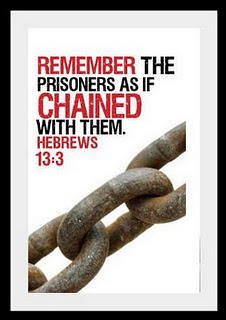 I started the week's blogging with a post encouraging prayers for the persecuted church around the world and I end the week with a few other cases where our intercession is needed. In that earlier post, I also gave you a link to the International Day of Prayer website. I'm providing here a few more that I've found very helpful: International Christian Concern, Compass Direct News, Open Doors, China Aid, Christian Solidarity Worldwide, and the Voice of the Martyrs.

I know that listing several of these sites can make the issue seem overwhelming but it is extremely important that Christians intercede for one another. Therefore, let the Lord set the pace for you. Even if you select one or two of these sites to visit occasionally, the resulting prayers for the people they mention will matter greatly.

From reading through a few of these sites this morning, may I suggest a a few more specific prayer targets to go along with the cases I mentioned on Monday? Maybe you could use them in one of your prayer times this weekend.

* Prison terms of up to five years or maximum fines of nearly nine years' official minimum wage are set to be adopted by Parliament in mid-November for groups of people who produce or distribute religious literature without going through Azerbaijan's compulsory prior state censorship of all religious literature. ..Azerbaijan has repeatedly amended its laws – usually with little notice or public discussion and secrecy surrounding texts – to restrict the exercise of the right to freedom of religion or belief and other human rights.

* An increasing number of people are being fined or threatened with fines across Russia for organising or conducting meetings for religious worship which has not been specifically approved by the local authorities, Forum 18 News Service has found. Local police and prosecutor's offices insist that such permission is required, a view challenged by many legal specialists, and bring cases under Article 20.2 of the Code of Administrative Violations. Some judges and magistrates throw out such cases, but it appears that about half the prosecutions are successful...

* In the city of Bogor, Indonesia, the GKI Yasmin Church holds open-air worship on the street outside its church building, while being threatened by extremists.  They don’t do this by choice, it’s actually because the local authorities forcibly closed their church premises after pressure from extremists.

* Leaders of the Agape Baptist Church were participating in a spiritual renewal meeting at the home of pastor Nguyen Danh Chau in Lai Tao village, Bot Xuyen commune, My Duc district, when the gang intruded at 9:30 a.m., sources said. Beating people and smashing property, the gang seriously injured more than a dozen participants and warned Nguyen Danh Chau that they would kill him if he continued gathering Christians, the sources in Vietnam said.
Posted by DH at 9:46 AM