Another Reagan Monument In A Former Communist Country 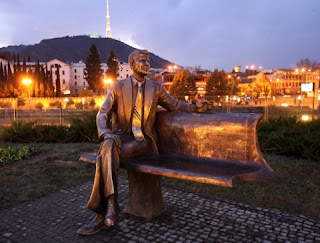 The mainstream media isn't reporting on this interesting event (with two exceptions that I saw in my search -- and both of them were brief and condescending), but I figured you'd want to know that Georgia's pro-Western president, Mikhail Saakashvili, recently unveiled a monument to Ronald Reagan in the capital of the ex-Soviet state.

In his remarks at the event, Saakashvili drew a distinction between the love of liberty that Georgian leaders possess versus their stronger, totalitarian enemy to the north, Russia. In fact, the Georgian president emphasized Reagan's courage and principle in "destroying the Soviet empire" as a major reason for the monument.

This statue, a charming one depicting a smiling Ronald Reagan sitting on a park bench, is being warmly welcomed by the people of Tbilisi. And that's not uncommon in much of eastern Europe's former communist bloc countries where several monuments have been erected in Ronald Reagan's honor.
Posted by DH at 11:52 AM