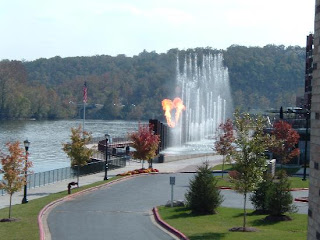 After my blogging yesterday morning, we drove into Branson to the U.S. Cellular store where Stephanie spent about an hour and a half helping Claire work out some problems with our new phones. We ran into some problems that even the staff there didn't know how to fix. (No surprise -- the problems involved Facebook!)

Following that we drove through the increasingly cool evening to the shops at Branson Landing (shown at right). Claire bought me a couple of shirts at the Bass Pro Shop. We bought a shirt for a friend at the St. Louis Cardinals store. I bought a couple of books at a half-price Christian books store. And then while Claire did some window shopping for clothes (no luck, it turned out), I drank coffee and did some work at Jammin' Java.

When we joined up again it was to buy three bottles of flavored balsamic vinegar (infused, respectively, by tangerine, strawberry and coconut) at a really nifty place, the Devo Olive Oil Company. We discovered these products a year ago and have used them quite a lot. We buy through their website and their lemon-infused olive oil is a product we use an awful lot. Then we bought Claire a slice of carrot cake (her favorite dessert) to take home. We bought it by the way, at Dino's 24 Carrot Cake Company. Yeah, that Dino, Dino Kartsonakis, the fabulously talented Christian musician. He owns the place; his music is playing over the speakers; and he has hopes of making his bakery a national chain. Claire, after enjoying the cake, hopes he's successful enough to get one in Omaha real soon.

We had thought about eating out last night but we wanted even more to watch the World Series game. So, back into the forest to the condo where we watched that thrilling comeback victoryfor the Cardinals. Not the best defensive game by either team but a really exciting contest.

Today I've been blogging while Claire has been dealing with website servers and the phones. In an hour though we're heading down to lunch at Vasken's Deli, our favorite Branson eatery. (The potato salad is the best I've ever had.) We'll hang around there and talk for probably quite awhile before going off to check out a few sites for hiking -- the trail near our condo is awfully short. The  rest of the day? Well, besides making sure we're home for hot dogs and the Texas/St. Louis game, I don't really know. That's part of the fun of vacations, right?