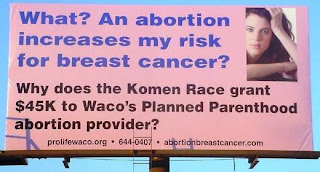 If Komen for the Cure, the American Cancer Institute and other organizations who loudly proclaim their desire to end breast cancer were truly responsible and forthcoming, they wouldn't be hiding the evidence that abortion greatly increases a woman's risk of contracting breast cancer.

Since 1957 there has been 66 studies done which looked at the relation of induced abortion and breast cancer, including 53 which showed a positive correlation and 25 that were statistically significant. There were only 13 which showed no association.

What is most telling is that one study author, Louise Brinton, had been a leader at the 2003 NCI Workshop on Early Reproductive Events and Breast Cancer Risk which concluded that there was no association between breast cancer and induced abortion. In 2009, Louise Brinton has now reported that there is a 40% statistically significant increase of breast cancer with induced abortion...