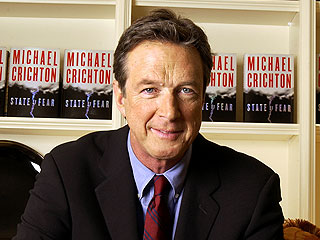 "This is not the way science is done, it is the way products are sold."

The hugely popular author of techno-thrillers, the late Michael Crichton sold well over a hundred million books all over the world including The Andromeda Strain, Coma, Jurassic Park, The Great Train Robbery, Congo, Looker, State of Fear, Airframe and Rising Sun. Not bad for a Harvard-educated physician.

In this particular speech given in 2003, Dr. Crichton presents a bold and persuasive case against political beliefs being packaged as science. Here is just one passage to give you a feel for his argument.

I want to pause here and talk about this notion of consensus, and the rise of what has been called consensus science. I regard consensus science as an extremely pernicious development that ought to be stopped cold in its tracks. Historically, the claim of consensus has been the first refuge of scoundrels; it is a way to avoid debate by claiming that the matter is already settled. Whenever you hear the consensus of scientists agrees on something or other, reach for your wallet, because you're being had.

Let's be clear: the work of science has nothing whatever to do with consensus. Consensus is the business of politics. Science, on the contrary, requires only one investigator who happens to be right, which means that he or she has results that are verifiable by reference to the real world. In science consensus is irrelevant. What is relevant is reproducible results. The greatest scientists in history are great precisely because they broke with the consensus. There is no such thing as consensus science. If it's consensus, it isn't science. If it's science, it isn't consensus. Period.

Take note of Crichton's description of "poli-scientists" Carl Sagan and Paul Erlich promoting the "nuclear winter" scare. Both of these fellows were also strong advocates (despite overwhelming empirical evidence) of anti-natal programs across the globe they described as "population control."

Biased guesses are like lies. And whether they are dressed up in statistics, twisted logic, or scientific jargon, they only remain what they are -- lies driven by ideological purposes.
Posted by DH at 1:18 PM