You Want Americans Judged By American Law? You Racist! 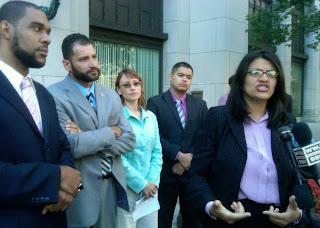 With leftist judges and politicians increasingly inserting the influence of foreign laws into American life, a few Michigan legislators introduced "American Laws for American Courts." It's a simple and eminently just concept, one which shouldn't even be necessary; namely, insuring that Americans need only obey laws that originate from the democratic process and which pass Constitutional muster. The United States Constitution, that is.

Is such a law necessary? Well, in a word, yes. Just ask the Gibson Guitar Company. (1, 2) They were raided last week by the Obama administration's Department of Justice -- not for supposed infractions of American law, but Indian law! Gibson thought they were protected because they are an American company on American soil conducting themselves correctly according to American laws. But this wasn't enough. The U.S. government decided to call out the dogs in order to enforce the laws of India -- in Memphis and Nashville!

Liberals who want to reshape society have been frustrated by those two aforementioned obstacles: voters and the Constitution. And their strategy of the last few decades has concentrated on what Bible scholars call eisogesis, a reading into the text of things that aren't really there. Indeed, liberals have stretched the Constitution (and case precedents) all out of whack, absurdly discovering principles which would have horrified the founding fathers. Like the right to an abortion, homosexual marriage or the removal of Christianity from the public square.

But finding emanations from the penumbra of hidden crystals in the Constitution isn't enough for progressives nowadays. And so they are adding new strategies. They are, like Barack Obama has done with energy exploration, illegal immigration and the Defense of Marriage Act, simply ignoring existing law.

But added to that, the left is trying to make Americans subject to treaties and laws of foreign origin, making Americans kowtow to policies decreed by the United Nations, the laws of other nations, and Islamic clerics who insist that Sharia law be given higher claim than laws made by mere men.

I ask again, is such a law as "American Laws for American Courts" necessary? Well, legislators throughout America think so. Legislation similar to that of Michigan's has been introduced in 25 states. Balanced. Simple. Rational. Legislation seeking to protect the way of life that Americans have fought and died for, a way of life marked by democracy, freedom and national sovereignty.

And yet what is the charge being thrown at those who would stand behind such legislation? You guessed it. Racists!

Here's the sad story from the Detroit News:

Opposition is mounting among Muslims against pending legislation that would ban Michigan courts from considering "foreign laws" — including Sharia, or Islamic law. Muslim and community leaders gathered Tuesday in Midtown to denounce legislation from state Rep. Dave Agema, R-Grandville, as divisive, unnecessary and mean-spirited.

"This plan goes against our country's core values of accepting people from all races and walks of life," said state Rep. Rashida Tlaib, D-Detroit, who is Muslim. "We simply cannot move forward with this plan. It's racism at its core."

Another sponsor of the Michigan bill, Rep. Martin Knollenberg, R-Troy, said the legislation is necessary because "we shouldn't allow other laws to usurp the state constitution." He scoffed at critics who called the bill racist: "Where does it say (in the bill) it's anti-Muslim?" Agema last week called the accusations of bigotry "hogwash."

A House committee has yet to take up discussion of the bill. The Council of American-Islamic Relations' Michigan chapter announced Tuesday it would sue if it becomes law. Gov. Rick Snyder's office hasn't done an analysis of the measure, said his spokeswoman, Geralyn Lasher. "We don't know if this is an issue taking place or whether there is a need" for a law, she said.

The American-Arab Anti-Discrimination Committee also encouraged members Tuesday to contact their state representatives and urge them to oppose the bill.
Posted by DH at 9:33 AM