Weathering the Hurricane...and the Hype 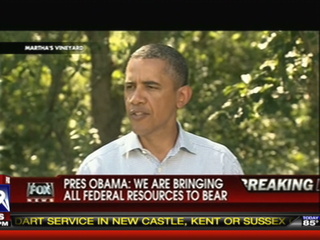 Once again, we must depend on the British press to give a rational, balanced look at things. In this case, it's Toby Harnden at the Telegraph showing the egg on the faces of journalists and politicians who over-hyped Hurricane Irene.

For the television reporter, clad in his red cagoule emblazoned with the CNN logo, it was a dramatic on-air moment, broadcasting live from Long Island, New York during a hurricane that also threatened Manhattan.

“We are in, right, now…the right eye wall, no doubt about that…there you see the surf,” he said breathlessly. “That tells a story right there.”

Stumbling and apparently buffeted by ferocious gusts, he took shelter next to a building. “This is our protection from the wind,” he explained. “It’s been truly remarkable to watch the power of the ocean here.”

The surf may have told a story but so too did the sight behind the reporter of people chatting and ambling along the sea front and just goofing around. There was a man in a t-shirt, a woman waving her arms and then walking backwards. Then someone on a bicycle glided past.

The images summed up Hurricane Irene – the media and the United States federal government trying to live up to their own doom-laden warnings and predictions while a sizeable number of ordinary Americans just carried on as normal and even made gentle fun of all the fuss...