The Plot Thickens: Gibson Guitars vs The Nanny State 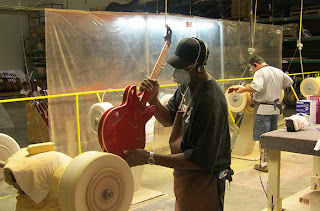 Last Friday I posted an alarming item here showing what a bizarro Nanny State we're living in nowadays. The story concerned a federal raid on Gibson Guitar factories in Nashville and Memphis because the Department of Justice believed the company was breaking a law about using improperly finished wood from India in the making of their guitars. But even if true (and the company denies it is), no laws would actually be broken.

As unbelievable as it seems, the Obama administration is now in the business of enforcing Indian law! The same administration that thumbs its nose at American laws and the Constitution itself is cracking down on Gibson's American operation because, in the mind of Eric Holder, it's not conforming to the laws of a foreign country!

Well, over the weekend the Gibson Guitar raid was featured across the web. Well, the conservative blogosphere anyhow. And I wanted to draw your attention to some of the best of that news and commentary.

* It isn't just Gibson that is sweating. Musicians who play vintage guitars and other instruments made of environmentally protected materials are worried the authorities may be coming for them next...

The tangled intersection of international laws is enforced through a thicket of paperwork. Recent revisions to 1900's Lacey Act require that anyone crossing the U.S. border declare every bit of flora or fauna being brought into the country. One is under "strict liability" to fill out the paperwork—and without any mistakes.

It's not enough to know that the body of your old guitar is made of spruce and maple: What's the bridge made of? If it's ebony, do you have the paperwork to show when and where that wood was harvested and when and where it was made into a bridge? Is the nut holding the strings at the guitar's headstock bone, or could it be ivory? "Even if you have no knowledge—despite Herculean efforts to obtain it—that some piece of your guitar, no matter how small, was obtained illegally, you lose your guitar forever," Prof. Thomas has written. "Oh, and you'll be fined $250 for that false (or missing) information in your Lacey Act Import Declaration...

Consider the recent experience of Pascal Vieillard, whose Atlanta-area company, A-440 Pianos, imported several antique Bösendorfers. Mr. Vieillard asked officials at the Convention on International Trade in Endangered Species how to fill out the correct paperwork—which simply encouraged them to alert U.S. Customs to give his shipment added scrutiny.

There was never any question that the instruments were old enough to have grandfathered ivory keys. But Mr. Vieillard didn't have his paperwork straight when two-dozen federal agents came calling.

Facing criminal charges that might have put him in prison for years, Mr. Vieillard pleaded guilty to a misdemeanor count of violating the Lacey Act, and was handed a $17,500 fine and three years probation...

* One of Gibson’s leading competitors is C.F. Martin & Company. The C.E.O., Chris Martin IV, is a long-time Democratic supporter, with $35,400 in contributions to Democratic candidates and the DNC over the past couple of election cycles. According to C.F. Martin’s catalog, several of their guitars contain “East Indian Rosewood.” In case you were wondering, that is the exact same wood in at least ten of Gibson’s guitars.

The Gibson facility wasn’t raided over allegations of tax evasion, charges of embezzlement, or even something as drab as child labor. Not even close. It was raided over what the DOJ deems an inability to follow a vague domestic trade law in India (one that apparently the Indian government didn’t seem too concerned about enforcing) regarding a specific type of wood. Not illegal wood, just wood with obscenely specific procedural guidelines.

Stand with Gibson: They have the Law on their side, just not the government.