Michelle Obama's "Unhealthy Sense of Entitlement" to Your Money 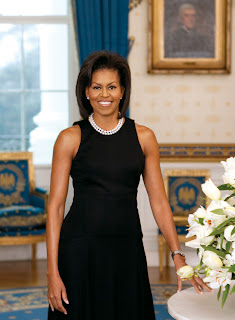 Thankfully, the British press will say what the American press, still besotted with the Obamas, fails to say.

Here's Nile Gardiner in the Telegraph.

...There does appear to be an unhealthy sense of entitlement on the part of the First Lady, which seems in poor taste at a time when 14 million Americans are out of work, the housing market is collapsing, and the United States is facing the strong possibility of a double-dip recession.

Perhaps Mrs Obama could take a few tips on austerity as well as humility from her British counterpart Samantha Cameron, who has just one assistant, in contrast to at least 17 personal staff for the First Lady, and doesn’t feel the need to travel en masse with an entourage at taxpayers’ expense.

The vast majority of Americans are making significant sacrifices at this time of economic turmoil, and tens of millions are struggling even to make ends meet. It’s time for both the President and the First Lady to exercise a bit of fiscal responsibility, not least when they are spending other people’s hard-earned money. 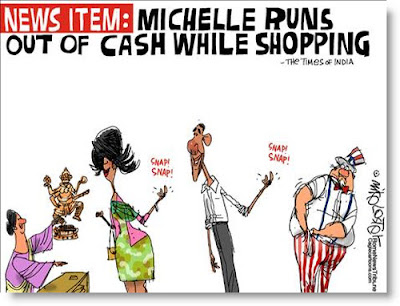