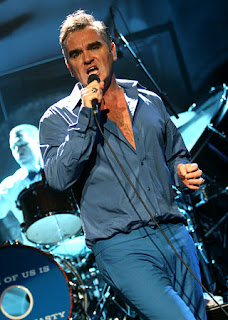 Has pop singer Morrissey's vegetarian diet made him completely loopy? Or is he merely expressing the logical extension of the radical trans-humanism which is gathering such momentum among scientists, pantheists and social planners?

The Daily Mail doesn't bother to hide its disgust in this report:

Morrissey has sparked a storm of protest with an outrageous claim that fast food chains are guilty of murder on a par with mass killer Anders Breivik. The famously vegetarian singer made the reprehensible comments on stage in Warsaw. The miserable Mancunian said the tragedy in Norway was 'nothing' compared to the evil carried out by McDonald's and KFC.

Morrissey, 52, launched into his tirade during the Poland leg of his European tour on Sunday night. He introduced Meat Is Murder, the title song of one of his albums, with a reference to the horrific murders carried out by the blonde-haired Norwegian. "We all live in a murderous world, as the events in Norway have shown with 97 dead,' he said (when the death toll was thought to be higher). "Though that is nothing compared to what happens in McDonald's and Kentucky Fried *%#& every day."...

Morrissey later refused to respond, saying his statement spoke for itself.

It certainly does that.

Wesley J. Smith comments, "This is reminiscent of PETA’s infamous 'Holocaust on Your Plate' pro-vegetarian campaign. Animal rights believers: Please denounce this odious moral equivalency between humanely slaughtering steers and the mass murder of innocent teenagers. It is odious on every level. Silence will be deemed agreement."
Posted by DH at 12:13 PM