A Top Ten of Barack Obama Lies (Only Ten, You Say?) 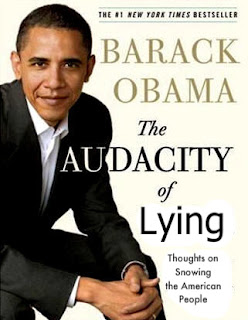 During the debate over raising the debt ceiling, President Obama said that 80% of Americans support including higher taxes as part of the deal.  But a Rasmussen poll taken the same week showed that only 34% believe a tax hike should be included in a debt-ceiling agreement.

Wow. That's as wild as lie as you can get. And awfully easy to see through if you've got the facts. However, as we've come to expect, the media let this one slide and didn't call Obama on this over-the-top whopper.

But that's just one of the latest of Obama's self-seeking fibs.

Over here at Human Events, the editors have compiled a Top Ten of the President's lies. Good stuff to remember. Good stuff to pass around, especially to Democrats and the mushy middle. Good stuff to keep your resolve sharpened for 2012.
Posted by DH at 4:56 AM