Putting His Way through the Presidency 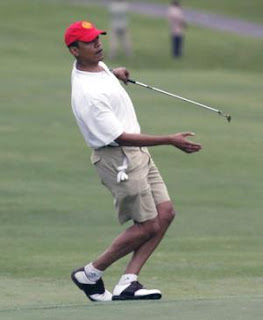 Keith Koffler passes along this update:

I know this will be surprising to everyone, but the president has gone golfing.

Having clearly had enough of the solitude of Camp David, where he and the family were making a rare weekend sojourn, the president choppered early this morning directly to Andrews and headed straight to the Air Force base golf course. Not clear whether Michelle in the girls are still at Camp David or back at the White House...

Today makes 11 weekends in a row that Obama has gone golfing. It’s his 14th outing this year and the 72nd of his presidency.

But the media, who treated every getaway of Reagan or Bush as a shameful dereliction of duty, gives Obama a free pass on the golf, the basketball, the constant vacations, and all the lavish parties that make up so much of Obama's schedule.