Obama or General Allen: Who's Telling the Truth About Afghanistan Withdrawal? 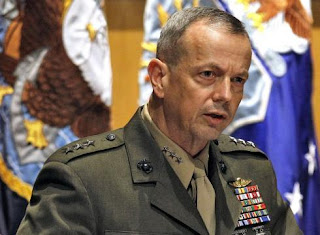 Lieutenant General John Allen told the Senate Armed Services Committee today that the Afghanistan decision President Obama announced last week was not among the range of options the military provided to the commander in chief. Allen’s testimony directly contradicts claims from senior Obama administration officials from a background briefing before the president’s announcement.

In response to questioning from Senator Lindsey Graham (R-SC), Allen testified that Obama’s decision on the pace and size of Afghanistan withdrawals was “a more aggressive option than that which was presented.”

Graham pressed him. “My question is: Was that a option?”

So the new top commander in Afghanistan says Obama went outside the military's range of options to devise his policy, and the White House says the president's policy was within that range of options. Who is right?

Here's more from Stephen Hayes over at The Weekly Standard.
Posted by DH at 10:10 AM