Criminals Use "Science" to Steal Millions from European Union 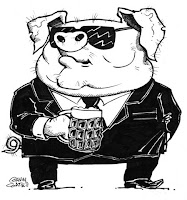 First there was bad science -- so-called science which operated on flawed data and sometimes even evil assumptions. Those examples include eugenics and macro-evolution. Then came junk science fueled by irresponsible ideological zeal which was used to further a purely political agenda. Think man-made climate change. What's next?

How about criminal science?

Steven Hayward over at Power Line comments on a story out of Europe about some $72 million that organized crime has pocketed through scams involving science grants. Check it out.

The strange part of this story is that it offers no details about what specific areas of government research funding were pilfered, or what "results" may have come of the fraudulent research projects they supported. Could it have been in the climate science domain, where the most government research money seems to be sloshing around?

We know that there has been organized fraud in the European carbon trading market. Trading had to be halted back in January when it was discovered that millions of dollars of carbon allowances had been stolen and cashed on the spot market, so this wouldn't be the first time that organized crime had fixed on the climate circus as an easy mark.

And one of the overlooked e-mails in the "Climategate" scandal involving the East Anglia University Climate Research Unit two years ago was a message from one of the scientists suggesting that a particular grant be routed through a Russian organization as a means of tax evasion.