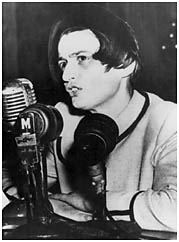 "There are two novels that can change a bookish 14-year old's life: The Lord of the Rings and Atlas Shrugged. One's a childish fantasy that often engenders a lifelong obsession with its unbelievable heroes leading to an emotionally stunted, socially crippled adulthood, unable to deal with the real world. The other, of course, involves Orcs." (John Rogers)

I've blogged a couple of times about Ayn Rand (Ayn Rand on Abortion, Pro-Lifers and Moral Selfishness and Shrugging Off Ayn Rand) but when I saw Bob Garrett's Facebook link to this terrific Chuck Colson clip, I had to post it too. Great stuff.