Planned Parenthood Breaks Out! What Will You Do About It? 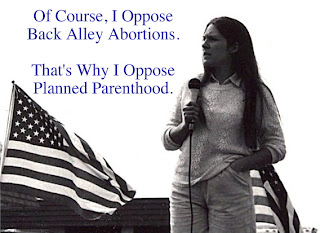 Planned Parenthood has been doing a little bit of hiding in recent months, afraid of drawing attention to themselves because of the very real possibility that Congress would stop giving them hundreds of millions of dollars in tax money every year. The mega-abortion corporation was also aware of how their brand had been tarnished by public revelations of Planned Parenthood's criminal activity -- covering up statutory rape, aiding in sex trafficking, fraud, misuse of funds. Those things were also keeping the organization lying low.

But when the Republicans in Congress caved in to Barack Obama and the Democrats on the de-funding issue, Planned Parenthood breathed a sigh of relief and decided it was time to leave their hideout. For instance, yesterday Planned Parenthood of the Heartland had an open house party at their new northwest Omaha facility AND they made the announcement that they would be opening six new chemical abortion centers (surgical abortions may be included later) in Nebraska cities: Fremont, Grand Island, Hastings, Kearney, Norfolk and North Platte.

Of course, this announcement prompts both tears and prayers from decent folks. But it should also prompt us to greater actions to expose and oppose this wicked organization. I suggest three practical steps.

1) Of immediate and critical relevance is contacting your state senators and letting them know that you strongly urge them to support the pro-life bills now under consideration in the Unicameral. Among the most critical are LB 521 which would prohibit Planned Parenthood's dastardly scheme for web cam abortions and the parental consent bill, LB 690. (More details on each can be found by hitting the designated links.)

2) Pass the word. Planned Parenthood has managed to get away with murder (literally) by keeping the public in the dark about how many preborn babies it kills through both chemical and surgical abortion, about its racist and eugenics origins, about their criminal activity, about the huge sums it gets from the government, about its lies regarding provision of health care, about their profane and perverse literature, and more.

The government has helped Planned Parenthood in this deceit. So has the education establishment, big business, the media, and even groups like United Way and the Girl Scouts. That means the public exposure of this nefarious bunch is going to be up to us.

How? Through conversations over the fence and around the water cooler. (You don't have to bring the topic up every time you talk to people...but bring it up frequently. After all, Planned Parenthood is killing kids every day.) Make announcements at church. Go outside Planned Parenthood abortuarys to pray and peacefully protest. Write letters to editors of newspapers and magazines. Post items on Facebook, Twitter and other social networks. Write letters to your political representatives.

Generously support your local pro-life pregnancy centers and groups that are actively working against Planned Parenthood. That latter group includes Nebraska Right to Life, Americans United for Life, Nebraska Family Council, and Vital Signs Ministries. And, of course, increase your prayers that God bless America by making Planned Parenthood the source of shame and scandal it so deserves.

3) To make your conversations and letters the most relevant and effective they can be, make sure and stay in the loop. Reading Vital Signs Blog is one way to do this and so I list below several recent posts dealing with Planned Parenthood for you to review. Take a few notes because this stuff will be dynamite for your conversations and letters. In fact, I'd suggest you bookmark today's post and use its links for reference over the next few months. And you can always keep up by using the Topical Index on the right sidebar. Just hit "Planned Parenthood" and it lists in chronological order every Planned Parenthood-labeled item I've ever posted. But the ones I give below represent a good start.

Planned Parenthood Tries To Spin Its Way Out Of Scandal

Yet Another Planned Parenthood Caught!

Planned Parenthood Insists: You Must Do Abortions!

I could go on and on. But remember, you can too by using the Topical Index feature. The important thing is use these posts to fire up your prayers, your conversations and your letters. Let's not let our lives go by without doing what we can to oppose this evil organization.
Posted by DH at 10:48 AM