Does "The Pill" Kill Post Conception? Planned Parenthood Says "Yes" and "No." 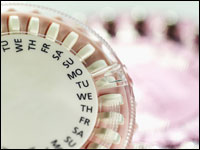 When it suits their purpose, Planned Parenthood admits that "the pill" acts as an abortifacient drug. But when the mega-abortion business is trying to keep the flow of American taxpayers money flowing into their coffers, their leaders will simply tell the opposite story.

Abortion industry cheerleader Gail Collins of the New York Times writes in her latest op-ed backing funding for top US abortion provider Planned Parenthood: "Dr. Vanessa Cullins of Planned Parenthood says that the pills inhibit the production of eggs or stop the sperm before they reach their destination. 'There is absolutely no direct evidence that there is interference with with implantation, she said."

That is interesting because the Guttmacher Institute (named after former Planned Parenthood President Alan Guttmacher) wrote this via the The American College of Obstetricians and Gynecologists: "Food and Drug Administration–approved contraceptive drugs and devices act to prevent pregnancy in one or more of three major ways: by suppressing ovulation, by preventing fertilization of an egg by a sperm or by inhibiting implantation of a fertilized egg in the uterine lining."

Later it says: "The primary mechanism of action of 'combined' oral contraceptives (those containing both estrogen and a progestin) is the suppression of ovulation. In addition, these pills may interfere with sperm and egg transport, affect the fluids within a woman’s reproductive tract or affect sperm maturation or the readiness of the uterine lining for implantation."

Or is the cop-out in Dr. Vanessa Cullins of Planned Parenthood’s statement where she says “no direct evidence” has been found? Could it be that the pill (among other methods) which are clearly designed to inhibit implantation of new human life but have yet to be clinically documented to do so because directly documenting such event is a virtually impossible and impractical task? Whether Cullins’ statement is technically true or not, it is clearly misleading and documents once again the medical misinformation present at Planned Parenthood...

And Planned Parenthood Colorado had this to say about Amendment 48 which would have given to to human life post-fertilization: "Amendment 48 is so broad it could outlaw emergency contraception, the birth control pill and other methods of birth control because they can prevent a fertilized egg from implanting in the uterus."

The point here is that Planned Parenthood certainly knows what the scientific researchers know; namely, that the so-called birth control pill will act as an abortifacient when breakthrough ovulation occurs. And breakthrough ovulation occurs a lot more than what most people realize. But in their spin efforts, Planned Parenthood will lie about this scientific fact just as easily as they lie about the facts of fetal development, the risks and long-term negatives of abortion, or what's really going on behind their doors.
Posted by DH at 11:29 AM