Belarus Dictator: "There Was So Much Democracy That It Was Sickening." 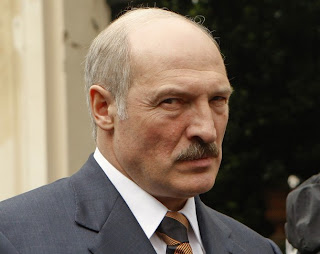 The above statement comes today from Belarus' "Dictator for life," Alexander Lukashenko. He is blaming the April 11 bombing in a Minsk metro station that killed 13 people on his primary enemies: tolerance, openness and democracy.

Though no stranger to irrationality, Lukashenko's claim is bizarre even for him. After all, he allows no democracy in his country whatsoever. Elections are thoroughly rigged. The constitution is ignored. Neither the press or the individual possesses freedom of speech. Indeed, a corrupt bureaucracy controls all aspects of life, even religion.

Nevertheless, the Communist tyrant remains paranoid about democracy. Either that or Lukashenko is merely playing an old Soviet game; namely, declaring a crisis posed by an invented enemy in order to justify yet further injustices on his own people.

And so I'm warning Belorussians to gear up for new ravages from the Communist thugs.
Posted by DH at 11:16 AM