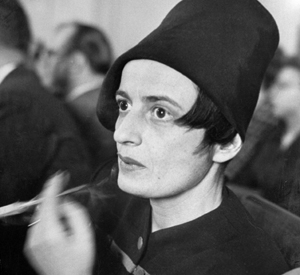 In this 3 and 1/2 minute audio, you'll hear such bits of wisdom read from the "conservative" thinker as:

* Parenthood is "an impossible responsibility for young people. Parenthood would force them to give up their future and condemn them to a life of hopeless drudgery, a slavery to a child's physical and financial needs."

* Pro-life advocates are therefore moved by hatred of the human race and not love for embryos.

* Preborn children are alive (made of living cells) only in the sense that one's hair and fingernails are alive. (The audience, as ignorant of or indifferent to basic embryology as is Ms. Rand, applauds at this statement.)

* Describing pro-life advocates, Rand insists, "Their hatred is directed against human beings as such: against the mind, against reason, against ambition, against success, against love..."

* Oblivious to the dripping irony of her statement, Ms. Rand says of pro-lifers, "By what right does anyone claim the power to dispose of the lives of others by dictating their personal choices?"

* Rand insists that the only foundation for a pro-life ethic is collectivism; that is, the belief "that men are the property of the state or the tribe."

* "The worship of the family is mini-racism."

* "People who do not want to have children are selfish. This is true." (Audience laughs and claps.)

* True selfishness is "the man of self-esteem who refuses to be a sacrificial animal and wants to live his own life for his own sake."

* "When you bring children into the world, you sacrifice your own sovereignty and become a means to an end."