About Those Toxic Mercury Bulbs: Will Nanny State Politicians See the Light? 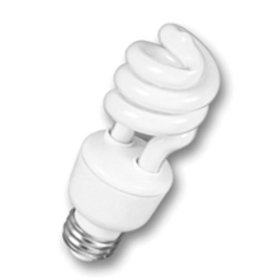 How Many Politicians Are Needed To Screw Up A Light Bulb? is a Forbes article by Larry Bell that easily makes the must-read list. In fact, with Bell's witty writing and the alarming facts he distributes throughout the article, it's one I suggest is a must to pass around too. Here's a teaser:

The lights have been permanently shut off at the last major U.S. incandescent light bulb plant, General Electric’s Winchester, Va., facility. But don’t worry.  GE’s Chinese plants will replace them with a different kind that is supposed to be better.

Anyway, we really won’t have any choice. Thanks to pressure from environmental activist groups, a 2007 law passed by the Democrat-controlled Congress and signed by Republican President George W. Bush will make the sale of standard incandescent 100-watt bulbs illegal effective January 1, 2012, 75-watt bulbs on Jan. 1, 2013, and 60- and 40-watt bulbs as of Jan. 1, 2014. This was because they can’t meet new government-imposed “efficiency standards.” Chief sponsors were Rep. Jane Harman (D-CA) and Fred Upton (R-MI). Rep. Upton, now Chairman of the House Energy and Commerce Committee, has since offered to hold a new hearing to consider removing the ban. He hasn’t promised to repeal it, but maybe he’ll finally see the light.

So that currently leaves us with two alternatives. It’s to either use expensive compact fluorescent lamps (CFL) that contain toxic mercury, or even much pricier light-emitting diode (LED) bulbs that don’t, but which produce even poorer illumination color quality.

Proponents argue that CFL lamps contain only very small amounts of mercury. Great! But then why are special clean-up instructions, room ventilating precautions and disposal requirements needed in case we happen to break a bulb?  And what prevents soil and surface water contamination from countless units that ultimately wind up in landfills?...
Posted by DH at 11:31 AM