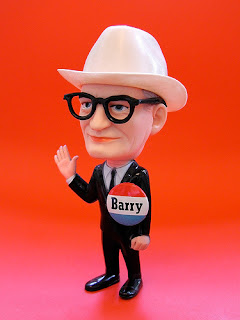 The first political campaign that ever excited me enough to get involved was the contest between Lyndon Johnson and Barry Goldwater in 1964.

I was in the 8th grade in Golden, Colorado.

In that race, educated and enlivened by my classmate, Grover Coors III, whose family had been rock-ribbed Republicans as long as they had been brewing beer, I came out swinging for Goldwater. I took the Arizonan's side in a formal class debate, argued economic conservatism with my pals...I even bought an AuH2O bumper sticker for my Dad's car.

Confidentially, Dad never used that bumper sticker but, since he voted right anyway, I didn't hold it against him.

That race set the tone for my political future -- except for one brief fling in the '72 primary season when Claire and I supported Democrat Henry "Scoop" Jackson. But then Jackson almost didn't count insofar as he was more Republican than Democrat -- a national defense "hawk" who was strong on law and order, civil rights and fiscal responsibility. But, as you remember, the Democrat party lurched wildly to the left that year and picked George McGovern as its standard bearer, as wacky a liberal as had, in those days, come down the political pike.

So we voted Nixon that year...as did most everyone else in the country. We never again looked seriously at a Democrat because the Democrats took that '72 election to dedicate itself to the dark side. Indeed, since those days Democrats have not only been the party of big government, confiscatory taxes, weak national defense and Nanny State tyranny, they've declared themselves the enemies of those moral standards that have stood civilization well for millenia. It's the party that rewards sloth and shoddiness. The party of abortion. The party that opposes family values...even marriage itself.

McGovern, what hath thou wrought!

Naturally then, our votes have always been for Republicans. Even when the party didn't field the best candidate. Gerald Ford and Bob Dole come to mind. And even though Claire and I have always been registered Independents. Why? Because to support anyone else (Democrat or third party candidate) served nothing but the cause of the Democrat agenda.

And the Democrat agenda (in all things: economics, foreign policy, education, commerce and moral values) is disastrous both for the United States and the cause of liberty around the globe.

I repeat -- I am an Independent. I am an Independent by legal registration and by conviction. And yet I urge those of you who have been frustrated by the G.O.P.( no one has been more infuriated by them at times than me) to carefully see how the Democrats yearn for division in the conservative ranks come election season. Genuine, thorough-going conservatives fight tooth and nail for their convictions -- even within the ranks. But the infighting must never become a substitute (not even a distraction) from the bigger fight we have with the Democrat Party and its nefarious designs on Western culture.

Recent history is quite clear that third parties, splinter groups, protest no-show intentions (even when principled and earnest) do not serve the conservative cause. Indeed, they give a tremendous advantage to Democrats to become even more entrenched, to pack the courts, to pack the bureaucracies, to write the rules, and to control the education system. Need I mention how valuable was Ross Perot to Bill Clinton?

The tea party movement, the general disappointment (in some circles, make that disgust) with Barack Obama, the rise of the alternative media are all dramatically changing the Republican Party. That's good because these factors are all increasing the party's power and its quality. There are still, as I've written before, plenty of "RINOs, Rockefellers and country-clubbers" who the party must purge from its ranks. But the Democrat power structure must be dismantled before principled and efficient conservatism will even have a chance.

I think I'm speaking for Grover Coors here...and, quite probably, for "Scoop" Jackson too. Let's first get rid of the stranglehold Democrats have on the nation. And then get back to streamlining, purifying and increasing the appeal of the G.O.P.
Posted by DH at 1:05 PM