Japan Relief Dollars: Should They Go to World Vision? 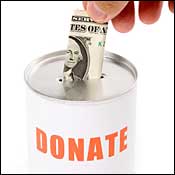 It happens too often. Charitable corporations (even Christian ones) get really big -- so big that policies and positions get complex (if not actually contradictory) -- so big that they compromise their founding ideals in order to accomodate large staffs, governments, NGOs, big donors, changing cultural norms, evolving philosophies, political-correctness, and so on.

And sometimes they're so big that the regular guy doesn't have access to detailed information. And when that regular guy (or gal) is trying to decide where to give their money or time, such a lack of information can be deeply troubling.

Yesterday, I heard and then read a couple of warnings about giving money to World Vision. I had posted something on my Facebook page about being careful of scams in the wake of the disasters besetting Japan and cautioned people to give to only reputable organizations. The one I cited was World Vision, one of the relief organizations that I have always thought was reputable, if not as devoutly evangelistic as others.

It was because of that post a trusted friend suggested a couple of articles about possible problems with World Vision. One came from Discover the Networks: A Guide to the Political Left. It lists World Vision under the category of Religious Left and has a detailed (but, I think, a bit dated) article suggesting that World Vision "is decidedly supportive of the Palestinian cause and condemnatory of Israel." Furthermore, the article characterizes the general outlook as leftist. "Viewing capitalism as an instrument of societal injustice, greed, and exploitation, WVI favors an economic model based on socialism and the redistribution of wealth."

The other article (a more recent one) dealt with World Vision's troubling promotion of contraceptives and the contraceptive mentality, its endorsement of abortifacient "birth control," and its partnership with the goals of the United Nations Population Fund.

I have written a letter to World Vision with my concerns and will let you know their answer, if and as soon as I receive it. But, in the meantime, you might consider any gifts you're considering for Japan relief efforts to go to religious denominations you know well. For Claire and I, we now feel safest (in terms of conscience) with giving to Baptist Global Relief.
Posted by DH at 3:27 PM