"It's Not Planned Parenthood. It's Planned Genocide." (Herman Cain) 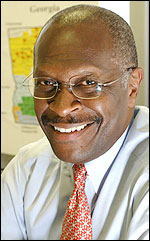 “Here’s why I support de-funding Planned Parenthood, because you don’t hear a lot of people talking about this, when Margaret Sanger -- check my history -- started Planned Parenthood, the objective was to put these centers in primarily black communities so they could help kill black babies before they came into the world. You don’t see that talked that much about. It’s not Planned Parenthood. No, it’s planned genocide. You can quote me on that.” (Herman Cain, former CEO of Godfather’s Pizza, columnist, author, talk-radio host, and a possible contender for President.)