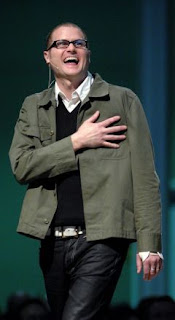 Is Rob Bell, the pastor of Mars Hill church in Grand Rapids, Michigan -- a fellow who is a bit of a hero to a lot of young evangelicals -- teaching the heresy of universalism? Everything in the promotional material of his book suggests that's the case. And seeing that this is the man the media dubbed the next Billy Graham, that would be very sad news indeed.

Here's a Breakpoint commentary on the matter. And over here is a very disturbing interview with Pastor Bell by NBC (formerly ABC) journalist Martin Bashir.

Watch and wince as Pastor Bell fumbles the interview. Bashir's first question was actually an amateurish set-up, a question of the infamous "Have you stopped beating your wife? Answer yes or no." type. It was one that Bell should have easily handled by pointing out the question's illogical and unjust presupposition.

Instead, Bell is beaten badly by the question and ends up on the defensive throughout the interview. Indeed, Bell compounds his initial incompetence by refusing to go to the Scriptures to explain the Christian position. He tries to lean on tradition, God's love, people's problems, his empathy with the angst of skeptics, and mystery -- a very big thing in Bell's preaching; bigger, I'm afraid, than revelation. At the end of the interview, Bell even falls into an obvious trap. He admits that his theology is heavily influenced by his own adolescent rebellion against a "fairly cramped evangelical family."

It's really a terrible performance, one which has Bashir playing him all the way through. And Bell ends up suggesting that just about everything has gone into the making of Rob Bell's opinions -- everything except the Bible.

The next Billy Graham? Not even close.