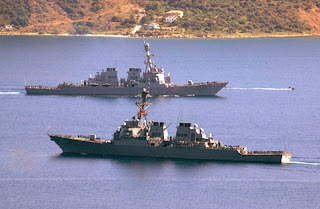 This stumbling statement does not come from a Saturday Night Live satire. They are the actual words given in a public State Department briefing and they come (5 days after the information was released by news sources) from Assistant Secretary of State Philip Crowley.

Can you believe this stuff? Yeah, okay; the sad and terrible thing is that you can. For two years of the Obama administration have proven it is long on gaffes, long on bows to foreign potentates, long on high-sounding (if empty) rhetoric but woefully short on intelligence, discretion and wisdom.

But Crowley's performance was remarkable even for a member of Team Obama: "I don't know what kind of ships they are." He doesn't know their destination or intention. He pledges to follow the matter with "some curiosity."

But author Barry Rubin is an adult and he is not only better informed of what's happening here but he's also more aware of the dangers posed by the new unrest in the Middle East. Check out his take on Mr. Crowley's remarks over at The Lid.

And while we're at it, we should also draw attention to how clueless the Obama administration has been about Egypt. Yitzhak Benhorin over at ynet News describes some very troubling revelations from a U.S. Senate hearing about America's ignorance of the situation there as well.
Posted by DH at 11:47 AM