St. Louis Is Heading the Way of Detroit. Can Anything Be Done? 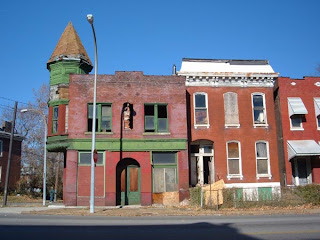 St. Louis is losing population -- speedily and substantially. A city that once ranked in the nation's Top Ten in population is now not even the largest city in Missouri.

And the city leaders? They don't have a clue as to what's going on. The city lost 8% of its population in the last decade (29,000 people) and yet the mayor of the city was stunned at the latest census figures. He thought the city was growing!

What could this decaying city do to reverse its sad fortunes? It's pretty simple, really.

1) Crack down hard on crime. That starts with judges handing out sentences that are appropriate to the crime. No long waits for trial and sentencing; no easy bail; no plea bargaining. Make the city safe and people will want to live there.

2) Attract businesses and homeowners with low tax rates. Offer incentives. Plan for growth, not stagnation. Create an atmosphere that is more friendly to business than it is to government, the welfare state or the labor unions.

3) Get the city's schools in order. That means dropping the standard NEA and teacher union models that have been such abysmal failures for St. Louis and begin offering competition and school choice, zero tolerance on drugs and threats to children's safety, and true merit pay in the government school system.

Will this happen? Nah; 'fraid not. Increasing personal freedom, challenging citizens to greater levels of personal responsibility and reward, granting more opportunity for business success -- these are not issues that resonate with the Democrat mayor and his colleagues. They're stuck in the ruins of the Nanny State, waiting for another government program, another confiscatory tax grab, another loan from Red China to get them out of trouble. Sorry, St. Louis.
Posted by DH at 9:16 AM