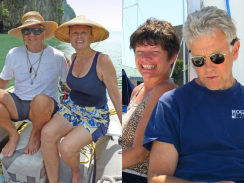 The lay missionaries whose boat was hijacked by Somali pirates last Friday have now been murdered. Scott and Jean Adam, Phyllis Macay and Bob Riggle were shot by their captors even as the pirate ship was being stalked by a U.S. Navy warship and an F.B.I. negotiating teams was attempting to secure the victim's freedom.

Somalia's government hasn't really functioned since 1991. Without local control and without serious pressure from the international community, these Muslim pirates have enjoyed a long, wicked party. They've pulled in millions from robbery and ransoming hostages. And they currently hold almost 30 ships and over 600 hostages.

And the free world lets this go on year after year?

On his Facebook page, Cal Thomas comments, "Regarding those missionaries who were kidnapped and subsequently killed by Somali pirates? Remember the day when most of the world was afraid to touch a hair on an American head. That was post Jimmy Carter and pre-Bill Clinton. Let's see, who was president when that sort of thing wouldn't have been tolerated? Oh yes, it was Ronald Reagan!"
Posted by DH at 9:24 AM