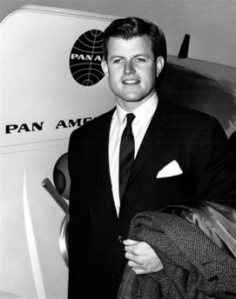 It's 1961. Edward "Ted" Kennedy is but a 29-year old assistant district attorney in Suffolk County. But his dad is the rich and manipulative Joe Kennedy. His brother Robert is the U.S. Attorney General. And brother John is the President.

So little brother is feeling his oats -- and spreading them too. In a junket involving several South American countries, informants to the FBI report Ted meeting with Communists and other "angry young men" from the left wing.

And he makes room for fun too. Like hiring out a brothel for the night.

The mainstream media is trying to ignore this story -- one they'd make a month's feast on if it were a Republican icon -- but Judicial Watch has finally obtained the FBI material and is showing it to the public. Therefore at least a few reports will surface from the MSM...like this brief item from the Boston Globe.
Posted by DH at 12:41 PM