What Price a Bigger Church? A "Merger" Scheme Gone Bad. 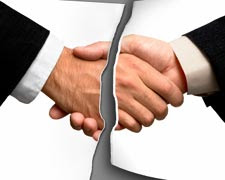 An evangelical pastor in Denver wanted his church to become a mega-church but it just wasn't happening. His church members had done everything he asked. They were extremely generous to the church and to the pastor personally.

But the pastor was impatient. So he opted for a merger with another church (this one more hip, more suburban) and used some controversial (many say underhanded and unfair) tactics to get the deal done.

By the time it was all over, the little church and its faithful, magnanimous, and mostly elderly members were left out in the cold. The new church greedily gathered to itself the little church's total assets (building, bank accounts, music equipment -- everything) and ordered it closed.

The merger hadn't produced two churches as the pastor had promised. No, the new one simply ate up the other and spit out what it didn't want; namely, the old parishioners themselves.

This sad, scandalous story isn't over yet though. The next chapter will be enacted in the courts.

...Smith admits he is biased in the case of Michael Atherton. For one thing, Smith was chairman of the committee that called the now-30-year-old Grand Junction-born pastor to University Hills.

For another thing, Smith said, he and another congregant chipped in $50,000 so Atherton could afford the down payment on a nice home.

And the congregation had invested heavily in their church building. They remodeled and expanded the original 1950s structure in 1985 to 1987, and then worked hard to pay off that $3 million debt in 12 years, Smith said.

"We all feel a sense of betrayal," Smith said...

Here's the story as reported by the Denver Post.
Posted by DH at 10:32 AM