Looking for a Good Christmas Movie? 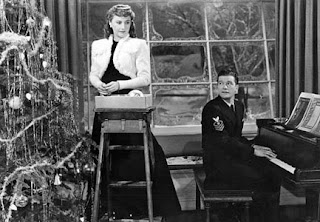 I read an article in the Los Angeles Times today which explained there were no new Christmas movies out this year. None at all. Well, I'd say that was too bad -- except for the fact that it has been many, many years since Hollywood did Christmas well anyhow.

So, let's not feel we're missing anything.

There are a few exceptions, of course. For instance, our Christmastime viewing has been enriched in recent years with The Polar Express (2004) and The Christmas Child (2004) starring William Moses and Steven Curtis Chapman. A bit earlier were Prancer (1989), A Christmas Story (1983), Ernest Saves Christmas (1988) and The Christmas Box (1985).

But our preference (in Christmas movies and movies in general) is for those films made in Hollywood's Golden Age.

Want a quick review? Keep in mind that these films are available pretty cheap through the internet and many can also be found through Netflix and other services. You might even find them in your neighborhood library.

But more important than being soft on your budget, these are films that will not compromise your spiritual sensitivity or sense of quality. For these films were made in an era when plot, snappy writing, wholesomeness and superb artistic values trumped today's preoccupation with impropriety and special effects.

So, let's take a look through our collection. Maybe you'll discover some gems for your family -- or perhaps be reminded of treasures you've forgotten for too long.

* Where to start? How about the Christmas-themed films of Bing Crosby -- White Christmas, Holiday Inn, Going My Way and Bells of Saint Mary's. The incomparable Bing stars in all of these with great music, of course, being a common element. And besides the music? Romance. Comedy. Pathos. And sheer class!

* Barbara Stanwyck stars in another couple of our favorite Christmas flicks: Christmas in Connecticut and Remember the Night. The first is especially great for all of you out there who are kinda' fed up with Martha Stewart and the second (which co-stars Fred MacMurray) is a first-rate and morally provocative film also.

* Everyone knows that Jimmy Stewart is the hero of America's most beloved Christmas film, It's a Wonderful Life. However, we actually prefer the lovely little Shop Around the Corner for Christmas fun and romance.

* Bob Hope as The Lemon Drop Kid is a terrific Christmas character as are Robert Mitchum and Janet Leigh in the sentimental New York comedy, Holiday Affair. Mitchum is fantastic in this role. Also check out the heartwarming story of Miracle on 34th Street – the version that presents Edmund Gwenn, John Payne, Maureen O'Hara, and the cutest little girl of the movies, Natalie Wood.

* Claire and I like almost all versions of Dickens' A Christmas Carol but our favorite is the one starring Alastair Sim as Scrooge. He's absolutely first rate as a cad AND as the converted fellow "who knows better how to keep Christmas than any man alive!" Other versions we like star Reginald Owen (1938), George C. Scott and the musical Scrooge with Albert Finney.

* Here's a rather macabre Christmas movie but it's one we absolutely adore, We're No Angels. It stars Humphrey Bogart, Peter Ustinov, Aldo Ray, Leo G. Carroll and Basil Rathbone. Bogart is at his surprising best in this subtle, deftly written, and impeccably timed comedy. 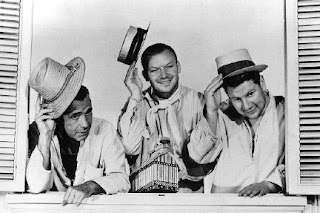 * Among lesser-known Christmas treats that Claire and I enthusiastically recommend are Fred MacMurray and Frank Sinatra (playing a priest, no less!) in Miracle of the Bells; John Wayne in 3 Godfathers; Loretta Young and Celeste Holm in Come to the Stable; Beyond Christmas with Harry Carey and Aubrey Smith; and Jimmy Durante in A Christmas Wish. There's also Meet Me in St. Louis with Judy Garland though only a little part of it is set at Christmas. Still, hearing Judy sing "Have Yourself a Merry Little Christmas" (and the non-Christmas "Trolley Song") is worth watching the rest of the movie.

* Other Yuletide treats? The Charlie Brown Christmas specials, of course. And, if you're fortunate enough to find a copy, The Best of the Andy Williams Christmas Shows is a genuine treasure. There's also the animated Annabelle's Wish with Randy Travis providing the narration. And besides these, we've collected quite a few Christmas-themed TV programs from the days of our youth.

I hope you've found something in this list to catch your interest. So, merry Christmas and happy holiday viewing!
Posted by DH at 11:20 AM